I Purchased The Elms Waterfront Cottages 20 years ago and have built up the summer tourist business. I have added the River Ridin’ Rafting business to the operation with jet ski rentals and rafting.

How It Got Started

In 1917, the Charles MacMaster house was completed in Lake Luzerne, NY. It was in keeping with Victorian architectural design. It is not known by me what Mr. Mac Master’s business was at the time; however, it could very well have been the tannery business. In any event, he had to have been of substantial financial means to build this unique home. At some point, the Charles R. Bishop estate purchased the property from the MacMaster family as well as all of the land along Route 9N. Charles was a carpenter by trade and worked for the Paper Mill in a high enough capacity to enable him to finance, build and complete his residence at 1 Bay Road, Lake Luzerne, NY 12846 in 1917 at the young age of 68. Charles was born on March 17th, 1849 in New York and died on July 5th 1930 in Lake Luzerne at the age of 81. The MacMaster House was valued at $4000 and it carried a mortgage. Charles’ father lived in Vermont and at the age of 19 Charles was living in New Bedford, MA according to the census. He married his first wife Minnie when they were 23 years old. Minnie S. A. (middle name, last name) was from Saxony, Germany. She was born August 25th, 1849 and died just 47 years later May 28th, 1896. They had four children William C (B: May 24, 1875 D: April 18, 1881) and Mary B (B: October 26, 1878 D: April 6, 1881) who passed away in the same month of April 1881 just 12 days apart at the ages of 6 and 2.5. One wonders if they had some kind-of-illness the struck these two children as one other child Mildred (B: October 26, 1878 D: unknown) Mary’s twin survived. A fourth child, Isabelle (B: August 19, 1883 D: June 6, 1961) married Nathanial Corlow and moved to Glens Falls as a dress maker and finally Whitehall, NY. 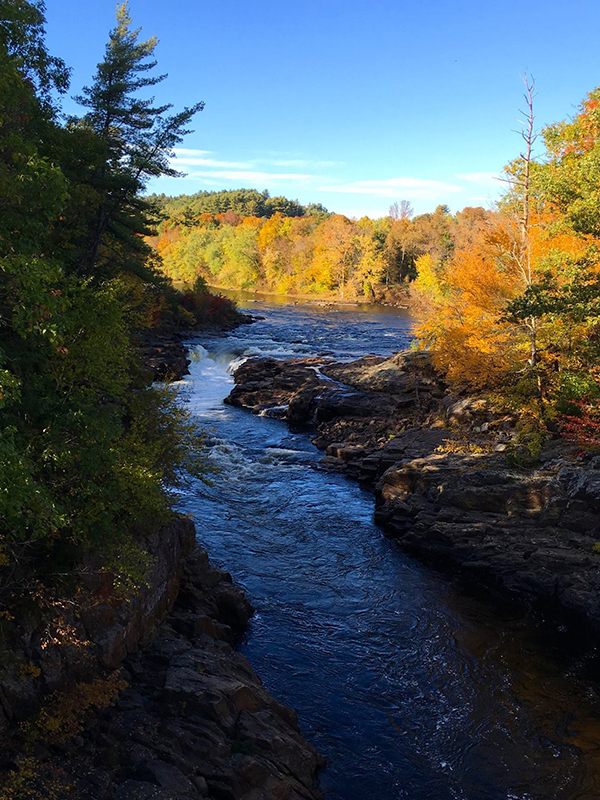 In 1900, Charles was a widower. Sometime thereafter he married Clara G. MacMaster and they embarked upon the entrepreneurial task of building the MacMaster House. When Charles passed away in 1930, Clara was 67 years old as she had been born in 1862. 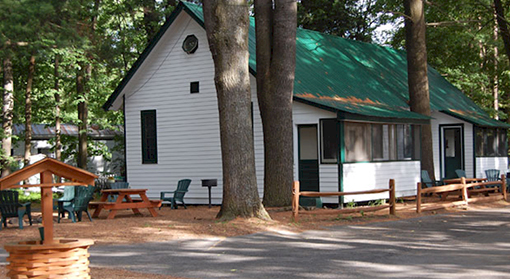 In 1943, the Albany diocese purchased the property from the Bishop estate for a Catholic Girls Camp and held church services in what is today the Beach House. Every two weeks a different group of girl’s minded the protocol of the nuns on retreat, as they went about their business of learning God’s ways.

In 1947, Edward B. and Alice Ruth Skerrett purchased “The Elms Waterfront Cottages & Lodge” from the Albany Catholic Church. They were from NYC and Ed had been a police officer looking for a new quality of life for his family. At this time, there existed the MacMaster house with three suites in it. One suite was for the owner and the other two units were apartments for rental. There also existed three bungalows in the back of the house with bathrooms and bedrooms for off the road guests. The Marion Lodge was also on the property and was used as a recreation/meeting room, with a storage facility in the attic as well as a full garage. The property also contained 5 one bedroom and 5 two bedroom cottages, and one church building with two units, (one for the church and one for administration) for a total of 19 units. The cottages only had exterior walls, two by fours inside, with one light bulb in the ceiling, bunkbeds and an outhouse. Many had hearts carved into the ceiling rafters, and “Johnny loves Susie” signatures throughout. The Skerrett’s started renovations on the cottages and enlarged the first four one bedroom cottages so much so that Cottage #4 was eliminated. (It was later rebuilt in 1980 at the south of the property and to this day is numbered out of sequence.) Their son Edward C. Skerrett of Cincinnati remembers working after school to help his dad fix up the cottages. A. Ruth Sherrett passed away in March of 2009 at the age of 98. The Skerrett’s operated the property until 1966 when they sold it to Arthur and Florence Brunelle. The Brunelle’s operated the property as is with three units in the house, 10 cottages and the Church/Administration building with two units, the Marion Lodge with one unit and the three bungalows until 1974. 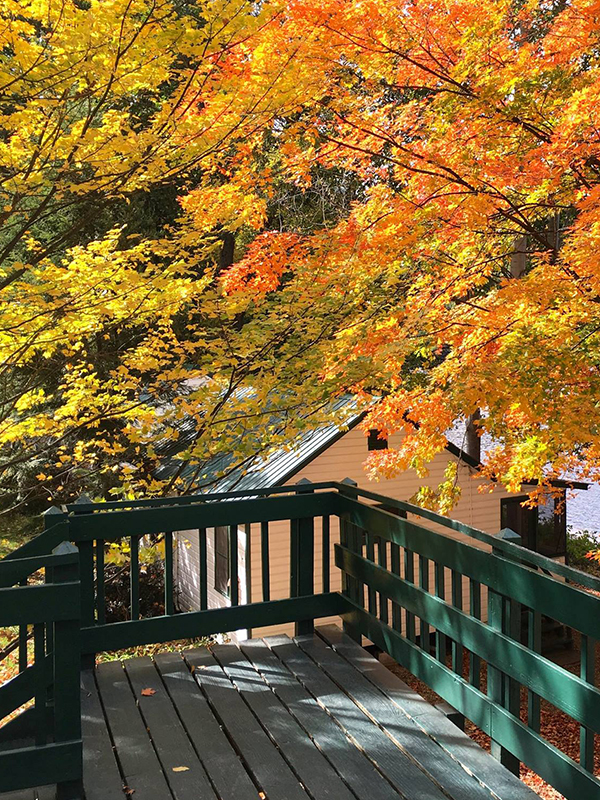 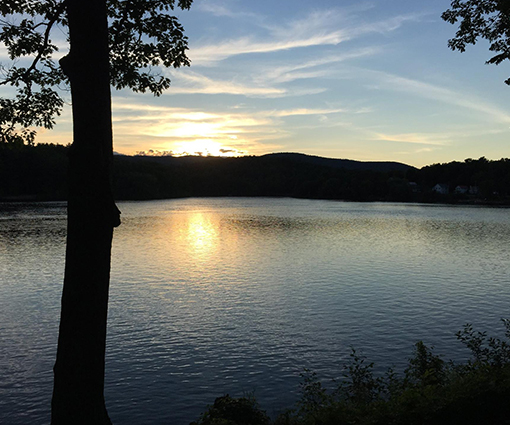 In 1974, the Brunelle’s decided to eliminate the three bungalows behind the house and sell the property. This reduced the number of rental units from 19 to sixteen when it was sold. Vincent and Barbara Nollman purchased the property in 1974, from The Brunelle’s and turned the Marion Lodge into a restaurant four years later in 1978. It was operated as a restaurant for four years and then closed in 1982 and was converted into a rental unit. They operated the house with three units, the Marion Lodge with one rental unit, the 10 cottages and the two units in the church house until 1986. The total number of rental units in 1986 remained at 16.

In 1986, Denise and David Paddock purchased the property from the Nollman’s. Paddock remodeled the Marion Lodge with two additional rental suites in the storage attic and renamed it the Sacandaga Lodge. It now had three rental suites. They continued to operate the house with three units, the 10 cottages and the two unit church building until 1995. The total number of rental units at this time had increased to 18. 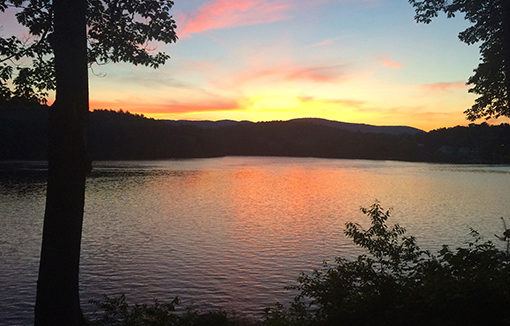 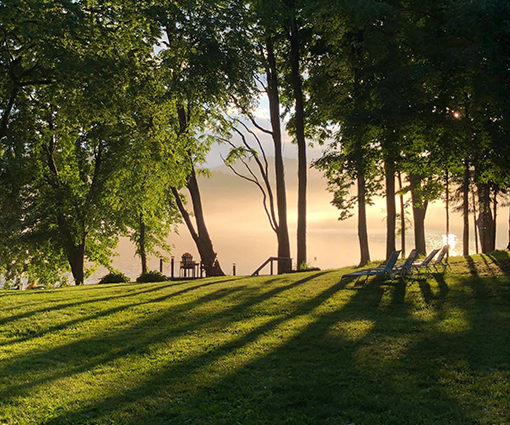 In 2001, the Adirondack Park Authority, granted permission to establish a marina gas facility on the property to fuel boats on the river. Warren County Planning, Lake Luzerne Planning, Army Corp of Engineering, Historical all approved. The Lake Luzerne Zoning authority refused to grant permission citing the need for a use variance. They did suggest that an additional structure could be built on the property at the southern end of the property.

In 2007, the Beach House was converted into two three-bedroom cottages from the exiting two bedroom suites with the advent of lofts and knotty pine restoration. When the ceiling was razed it revealed mahogany rafters used to reflect the dignity of the church setting in the woods. Several beams were retained to reflect the history of the property. In the winter of 2007, the Oboyski Cottage #6 was renovated. The kitchen and dining room ceilings were raised and covered with knotty pine wood to give the cottage a rustic open-air feeling. When the ceiling was pulled out, hearts and arrows with dates like “Betty and Johnny 1943” could be seen as reminders of the guests who enjoyed the Elms from the past. 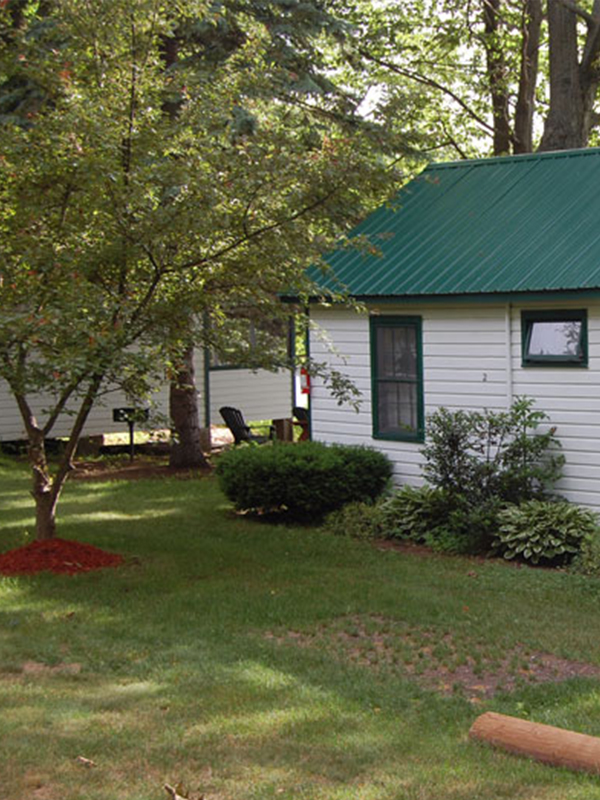 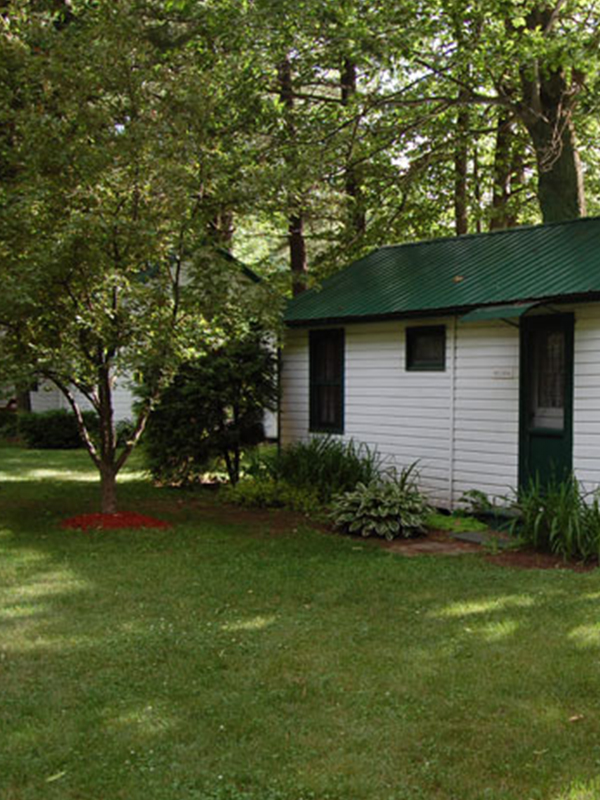 In the Fall of 2009, the Doran Cottage #4 was renovated. The kitchen, dining, and living rooms were covered with knotty pine wood and varnished. This cottage was built in 1980 and is the only one with a picture window

In the Fall of 2013, a major renovation was undertaken in the Sacandaga Lodge. All three suites were wrapped in knotty pine and stonework was displayed in suite #2. The cabinets were rebuilt with knotty pine, new stoves were added and flat screen televisions were mounted on the walls.

In the fall of 2014, a new knotty pine bathroom was established in the Bay Harbor Suite C and future plans include a knotty pine renovation of the sun porch in this 2000 sq ft suite. Also this year we had relocated River Ridin’ lazy river rafting trips to the North side of the house with a Tiki Hut and added a jet ski for summer fun. In the summer of 2014, a large pine tree crashed near cottage #4. A local carver was hired and Chief Tiosaronda and Eagle Quick Eye were created. The kids that summer were given the project of writing a story, to tell of how the Chief meet the Eagle and how the Eagle got its name. That story is now on our web site with the credits from the kids. The Iroquois Indian name for this certain tract of land called Luzerne is unknown, however “the spot where Lake Sacandaga meets the Hudson River and forms a large bay, was called Tiosaronda…the meeting of the waters.” “This is where the Sacandaga and Hudson rivers lift up in a frenzied embrace before they join together and make their way South toward New York City.” (www.townoflakeluzerne.com) Poets and romanticists reflect today upon the analogy of the rivers merging together and the meeting of two people as a “Tiosaronda tryst.” We honor Chief Tiosaronda with his imprint on a tree next to cottage #4 along with an Eagle and a dream catcher for kids of all ages to make a wish. Have a little fun…take the kids over for a Facebook photo to remember your trip with the Chief…make a wish in his dream catcher and spin a story!!! 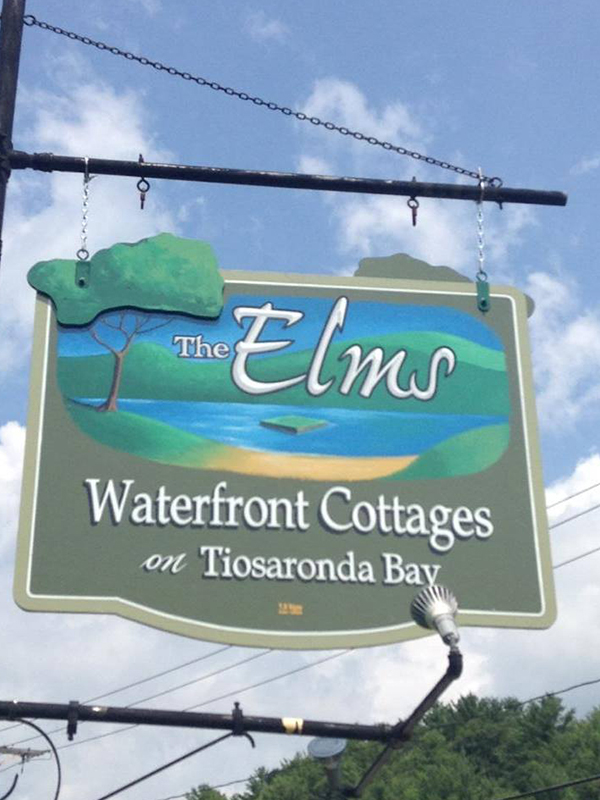 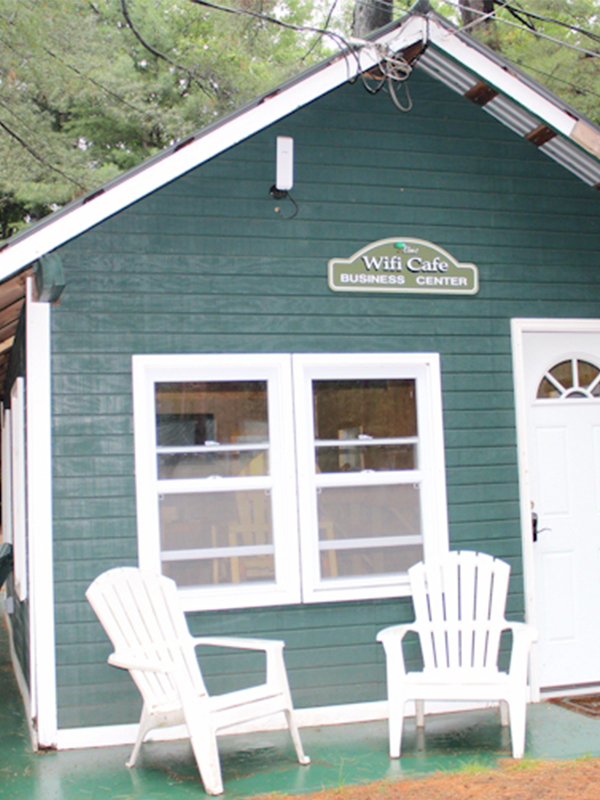 In 2015, we reluctantly added a new WiFi Center at the Nest. We installed radio antenna and boosters to bounce a WiFi signal to all cottages. We also renovated the Nest with tables and custom bar stools on rollers for folks to work on their laptops. It also has a big screen TV to watch the soccer games, Olympics and Netflix movie nights.

In 2016, we added a new deck with stairs leading down the bank to the river for our River Ridin’ Rafting and Jet Ski operations. We also added another jet ski to the fleet and doubled the size of our lazy river ridin Tracker inventory. We have also created a Japanese garden under the shade by the sleepy brook.

We installed the Sirvoy booking engine to our website to enable our customers to make reservations on-line from the comfort of their homes and the while on the move from a mobile phone. We also celebrated the 100th anniversary of the MacMaster House known today as The Elms.

2019…Celebrating our 25th Anniversary this year. We upgraded the McMaster House with a new roof, exterior paint and shutters and completed the knotty pine renovations in the main wing. We renovated the second suite with two queen bedrooms and removed the kitchen to create a 6 bedroom option for guests. We also installed a new building in the back of the property called “the barn” to store jet skis in the winter and purchased a new John Deere R2032 tractor with a heavy duty bucket for Chandler to have more “fun on the job.”