Many moons ago a tribe made their home in the Adirondack mountains. They were known as the Tana Kwon [Meaning: One with The Elms]. The tribe lived in tranquility; hunting their valleys by day and huddling by fires at night. Sometimes they’d fish for trout from small streams near the village. It was a utopia. Families flourished in the tribe; several generations’ worth. As time passed the tribal elders watched their grandchildren grow. There were so many now. One woman volunteered to supervise them.

Her name was Aleshanee [Coos. Translation: She plays all the time]. And she lived up to her name, even in her old age.Aleshanee did her best to keep up with the youngsters as they ran around the village. They played hide-and-find behind woodpiles and inside the longhouses during playtime. Most of the time they had chores to do. Carrying water, shucking corn, and finding timber. Aleshanee’s grandchildren and their friends kept her young. She loved them all equally, but saw something special in her grandson.

In His Group Of Friends

Unfortunately, he was also as hyper as he was smart. The boy was notorious for racing by her during playtime; sometimes causing her to stumble. This habit earned him the name Underfoot. Underfoot grew into an honorable young man. All the elders respected him. Though he still got in their way from time to time. He remained an alpha among his peers; leading his friends through peace. Unfortunately that peace wouldn’t last long. 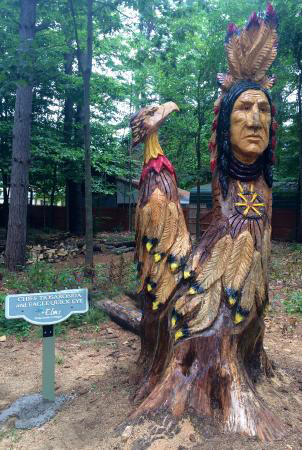 He Was The Leader 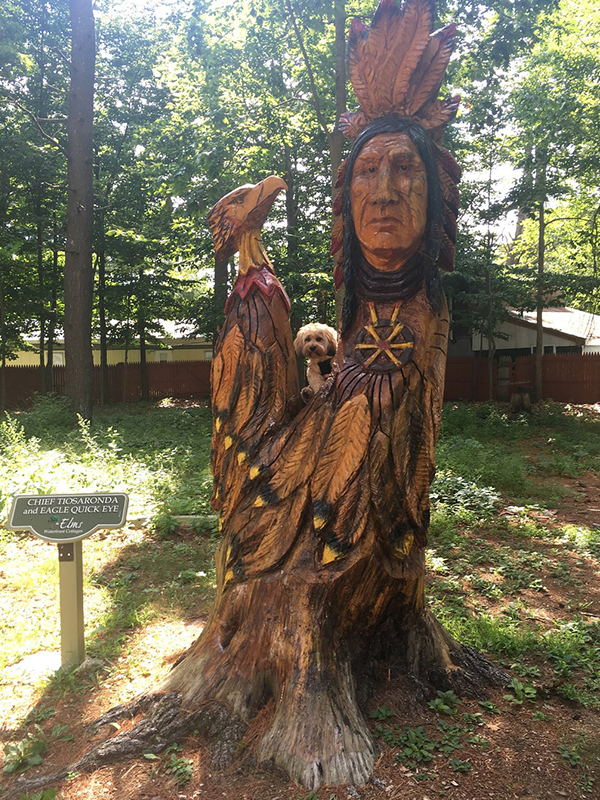 Another tribe had moved into the Tana Kwon’s home valley. They called themselves the Toh Lesi [Anagram for hostile]. Wanting a friendly coexistence, the Tana Kwon sent their new neighbors a fresh deer as a peace offering. The Toh Lesi took their offering, but promised no peace. They told Chief Genessee [Iroquois. Translation: A beautiful valley] to keep the Tana Kwon away from them. Or there would be bloodshed.

Underfoot flinched at the thought of his friends and family going under the knife of a hostile tribe. Chief Genessee told the Tana Kwon they would be safe. The Tana Kwon wanted to believe it, but it was hard. There wasn’t enough game in valley for two tribes. Even less fish. One night Aleshanee was sitting next to the fire by herself. Her grandson emerged from the longhouse and sat beside her. She could tell he was troubled with something. “Your night sky has many clouds in it, Underfoot.”

“Elisi [Cherokee. Translation: Grandmother], I must go. We cannot survive here. Not in peace. Not like this,” Underfoot explained. His grandmother nodded silently, tears of understanding flowed down her cheeks. “I leave at sunset and return when I find our new home.”

Underfoot packed his things and left the village before anyone was awake. He managed to hike out of the valley by sunset. His stomach began to grumble at the mountain’s peak. It was time for breakfast. Underfoot gathered kindling. He was preparing to make a fire when he heard a horrible screech.

Normally he would have ignored such a noise. He didn’t like to meddle in the affairs of wildlife. This was different though. Underfoot found himself on his feet, as if he was being driven by the Great Spirits. He ran through the trees as another pained squawk pierced the air. A clearing appeared. In the center of it was a small tree with an enormous nest at the top. On the ground next to it was a bald eagle facing off against a rattlesnake.

The bird looked wounded. Its opponent didn’t. The snake began slithering towards the tree. Mama Eagle watched in horror as it approached the trunk. She let out a high screech and took flight. The rattlesnake couldn’t react fast enough and ended up clenched between the eagle’s talons. Mama Eagle struggled to soar higher and higher until the venom finished its job and she spiraled to the ground, taking her foe with her.

Underfoot raced toward the tree. He climbed up the branches and into the nest. In the center was a single egg. Underfoot returned to his campsite with it. He roasted nuts and berries for breakfast while cradling the egg. The smells of breakfast hung in the air as Underfoot felt a trembling in the egg.

His eyes shot to the splitting shell. A small beak poked through. Underfoot helped it move away the pieces of shell. Soon a pink head poked through and tiny eyes stared into his. He smiled at his new friend, “Nice to meet you.”

Underfoot continued his quest, caring for the Tana Kwon’s newest member along the way. After three suns and two moons, he finally found the perfect place. Two rivers merged; each running rampant with fish. Game bounced merrily through the trees in every direction. The place was utopian. It was time for Underfoot to return.

Two moons passed; the tribe gathered what they could and set out for their new home. Underfoot led the way beside Chief Genessee. The chief marveled at how close the young man and eagle were already becoming. They arrived at the location Underfoot spoke of. Its magnificence drove the tribe to their knees.

Chief Genessee turned to Underfoot and placed a hand on his shoulder. “The Great Spirits have blessed you and this eagle. I now declare you Tiosaronda[Iroquois. Translation: A meeting of two waters], after our new home, and ask you to take my place as leader.”

Chief Tiosaronda led the Tana Kwon to peace and prosperity. Many seasons cycled by as they built their new village. The tribe continued to grow. So did the eagle that never left Tiosaronda’s side.

The eagle went with Tiosaronda and the hunters every day, becoming a crucial part of their team. He could see prey before prey could see him. Some believed the eagle could see prey from a mile away. On land he struck down game before an arrow could. On the water he dove in and snatched fish before lines could be cast. These skills earned him the name, Eagle Quick Eye.

One day Eagle Quick Eye spotted a tribe coming into the Tana Kwon’s territory. Chief Tiosaronda led his men to meet their visitors. It was the Toh Lesi; they were looking to push the Tana Kwon out of their home again. Arrows flew through the air before words had a chance to.

Chief Tiosaronda led his men against the Toh Lesi. The Tana Kwon were a peaceful tribe, but their archery skills were unmatched. Plus they had Eagle Quick Eye on their side; he slammed enemies to the ground before soaring away. The battle didn’t last long. Chief Tiosaronda brought all his men home free of harm.

The Tana Kwon never had any issues with hostiles after that. In fact, other tribes in the area began bringing peace offerings to them instead. Chief Tiosaronda accepted the gifts with open arms and encouraged positive relations between the tribes.

Seasons continued to run their course. All was well in the Tana Kwon’s nook of the Adirondacks. One morning a wrinkled Chief Tiosaronda took a walk in the woods while the tribe prepared breakfast. Eagle Quick Eye floated quietly over the trees above him.

Tiosaronda found a shady tree and sat beneath it. Eagle Quick Eye fluttered down, his graying feathers flapping gently. He laid his head on the chief’s chest. The pair closed their eyes and let the Great Spirits guide them to another realm of peace as the smells of breakfast wafted in the air.

What are you waiting for?